de la Parte & Gilbert, P.A. was proud to sponsor Danny Weldon, a senior at Tampa Catholic High School, at the Florida American Legion Boys State which was held July 6-12, 2014 at Florida State University. David Caldevilla, a Shareholder at de la Parte & Gilbert and a 1979 graduate of Boys State, was on hand to congratulate Danny upon his graduation from the program on September 4, 2014. 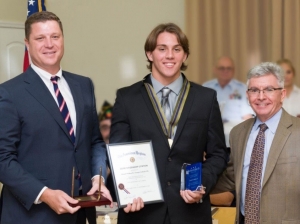 Boys State is a comprehensive one week leadership action program in state and local government. Attendees are well qualified, male high school juniors from all over the state of Florida. The program is designed to develop a working knowledge of the structure and political process of Florida’s government. Instruction is presented on the law and court system, parliamentary procedures and Florida’s political history. Participants “run” for office and each level of government is then run by the elected delegates using the basic laws and procedures of the State of Florida in a way similar to how actual legislature operates.