The Bank of America Plaza will be featuring the Automotography artwork of attorney David M. Caldevilla through December.

David, a self-proclaimed “gear-head,” has a passion for cars that dates back to his early childhood. After growing up playing with Hot Wheels and slot cars, he eventually bought and refurbished his first car – a 1969 Camaro. During his teenage years, David also found an 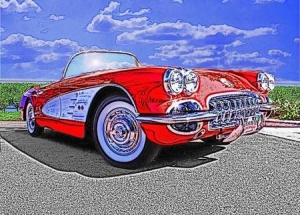 interest in photography and cars became his favorite subject to photograph.

While editing some of his photos, David found that he could use technology to blur the lines between painting and photography, a technique he calls “Automotography.” Now, through imaginative camera angles and digital editing effects, his photos take on their own distinct personalities. You can view David’s artwork in the lobby of the Bank of America Plaza or at www.automotography.com.

David is a Shareholder with de la Parte & Gilbert and has practiced there since 1989. He is “AV” rated by Martindale-Hubbell and is Board Certified by The Florida Bar in Appellate Practice. In addition to his appellate practice, he also focuses his practice on administrative, civil litigation, environmental, eminent domain and government cases. David can be reached at dcaldevilla@dgfirm.com.